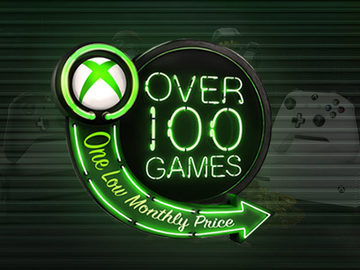 •Tap into more than 100 great games, including Xbox-exclusive titles, for a single low monthly price with Xbox Game Pass! As an Xbox Game Pass member, you get access to a growing library of Xbox One and Xbox 360 backward-compatible games, with new titles added each month. You can play Xbox-exclusive titles, like Forza Horizon 4 and State of Decay 2, the day they launch and enjoy exclusive discounts on games included in the existing Xbox Game Pass catalogue. With this deal, you can jump into Xbox Game Pass’ massive library with a 14-day trial!.
•Access a growing library of over 100 Xbox One & Xbox 360 games on your Xbox One console.
•Play Xbox-exclusive games the day they launch.
•Enjoy access to hit games, like Forza Horizon 4 & State of Decay 2.
•Download games directly to your console & play online or offline.
•Enjoy exclusive discounts on games & add-ons in the existing Xbox Game Pass catalogue.

•Unredeemed licenses can be returned for store credit within 15 days of purchase.

Get The Deal Now